Here are some spoilers I've found from around the internet.

In Episode 4 Paddy stands trial and Jane has to testify against him. Plus we learn that Doyle and Cavanaugh grew up in South Boston together, and Doyle worked as Cavanaugh's confidential informant to help get drugs out of the area. (TVGuide)

On the first day of Paddy’s murder trial, Maura gains insight into her father from Hope (Sharon Lawrence). Korsak opens up about Cavanaugh’s tragic past. And in an unexpected twist, Maura must decide which side she’s on when she and Jane unravel a shocking secret about Paddy and Hope that affects them all. (TNT) 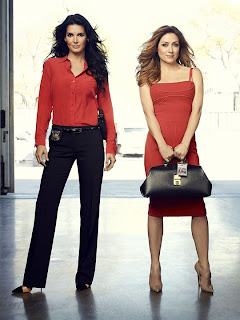 TNT's hit procedural puts a spin on the usual crime drama by giving us two female leads: hard-nosed cop Jane Rizzoli (Angie Harmon) and fashionable medical examiner Maura Isles (Sasha Alexander). Plus, there's an unspoken sexual tension between the gals that plays well with a certain segment of the viewing public. "Prison Break's" Amaury Nolasco joins the cast this season as a former colleague of Jane's who's now in charge of the police department's drug unit.

Posted by Kelly/Taiko at 7:17 PM No comments: