Episode 215 - Burning Down The House

Appropriate title. By the end the house that Janet built was ablaze! 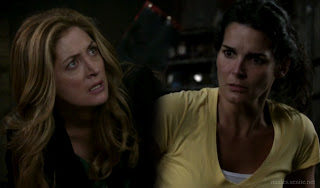 I'm going to say right off the bat, I love this episode. It's everything a season finale should be. There's a lot of controversy going on all over the internet, but as far as looking at a season finale on a hugely popular cable show, wanting to make sure fans return - Janet Tamaro did her job well. We will be discussing this, debating, arguing, and discussing some more for the next seven months. That's what they want.

Anyone who has read my reviews knows I love Paddy Doyle. I knew this was gonna be a good episode just for the Maura/Doyle relationship. I wasn't disappointed. There is an entirely different side to Maura that comes out with him. It's fascinating watching the transition. I hate that he may die. Not only cause I love Doyle but because it makes it that much harder for Jane and Maura to come back together. I'm really hoping he survived.

I love the new relationship between Maura and Constance. I hope they have Bissett under contract to come back for some more episodes. I'm really interested in seeing that relationship progress. Loved when Maura told Doyle "That's my mother." My brother was adopted and "our" mother will always be his mother. The fact that she didn't give birth to him doesn't matter at all.

We see throughout this episode the accumulation of the strong friendship that has grown over the last two years between Jane and Maura. Jane is the first one Maura calls. Jane stops everything and races to the hospital, then doesn't want to leave. Maura is her first thought in the morning when Jane wakes up with Dean. That's what makes the ending brilliant. In one moment that's shattered and we all fear it can't be put back together. Brilliant!

On to Dean. I am not a Dean hater, I could take him or leave him, but I really hope they don't follow the books. (Jane and Dean are married in Tess Gerritsen's novels.) Coming in and out is fine with me if there's a purpose and not just boy-toy. Definite purpose here. If he hadn't shown up things would have been different. It's Jane who yells "Gabriel no!" When he's about to shoot Doyle. From what I can see he betrayed Jane's trust and that will definitely come into play. She needed to trust him and his betrayal could cost her Maura's friendship. Oh yeah, there will be hell to pay.

Now Doyle should've ran, or dropped his gun after Dean shot him. It was stupid to raise it back up. It was pointed at the cops and that is what cops are trained to do. Gun pointed at you - shoot! Jane went on instinct. I got that and I do not hold it against her. Look at how upset Jane was when she ran to Maura and Doyle. She didn't want to shoot him. But all Maura could see is her father dying, a man she didn't realize she loved until that very second, and it was her best friend who took the kill shot. Wouldn't anyone be angry? Maura is angry at the people who shot him, angry at herself for pushing him away when now there may not be time to have a relationship... Maura is angry and I get why. She's angry at Jane. I get it. It's not unrepairable. She will not be angry forever. Wounds heal. If he lives I predict it will take a shorter amount of time for Maura and Jane's friendship to mend. If he dies, it's still doable, just a longer timeline.

They have to work together and that helps in mending fences. When forced to face the person day in and day out, to be reminded of what made you like them in the first place, it helps the wounds heal faster.

Looking at it from a strictly television aspect, I think the chemistry between Angie and Sasha is so strong that it'll be awesome to see the darker side of that relationship. Especially coming from Maura. The sparks will be fantastic!

Also on the completely practical and logical side of things, the show is called Rizzoli & Isles. Although angst between them can be played out for a while, they are the lead characters and will have to come back together. That's only logical if TNT hopes for at least three more seasons. Season three will be angst driven, at least for part of it. We can be pretty sure of that. But it will resolve, and in most cases friendships become stronger.

Major kudos to Sasha Alexander for an extraordinary performance. All over Twitter people were passing around the tissues. I tweeted it last night and still mean it: If she doesn't win an acting award there is no justice in this world!

Angie Harmon embodies Jane Rizzoli and the more subtle aspects of her performance in this episode was wonderful to watch.

To Sasha, Angie, Janet Tamaro and all the cast and crew: Thank you for a great second season. I can't wait for the third!

Not a bad episode, but not the greatest. They can't all be outstanding, and this one certainly was not.
Posted by Kelly/Taiko at 8:09 AM No comments:

Liked it! Funny! More coming soon...
Posted by Kelly/Taiko at 8:07 AM No comments:

I liked this one. I like a little angst every once in a while between the ladies.

Family dinner - we're seeing that more and more at Maura's. I like it.

I was glad Maura pushed Tommy away when he tried to kiss her, but not for reasons you may think. Love rizzles but don't have an issue with them being straight. The reason I was glad she didn't kiss him is because she knows Jane's thoughts on the subject, and respects Jane and their friendship enough not to jeopardize it.

Wasn't thrilled with the Frost/ex storyline. Not exactly sure why, but I think the episode would have been fine without it.

I'm sure everyone has an opinion on Maura not telling Jane. I for one understand both sides. Maura had to keep quiet. They make you sign the paper to ensure you stay quiet. Jane's brother was just arrested and her best friend knew it was coming. Naturally she's pissed.

Love the blood/paint thing. I even made a short video highlighting all the "reddish brown stain" times.
http://www.youtube.com/watch?v=G7LLHu3X4Ng

The whole "how long do you think you'll hate me" scene was done well. The looks between Jane and Maura speaks volumes. The best part though is after Jane leaves, the smile on Maura's face. She knows it's not gonna be long before Jane forgives her.

The last scene was quite possibly the best scene in the entire show. Jane willing to put her feelings aside so Maura can be happy with Tommy. Maura putting her feelings for Jane ahead of any possibility with Tommy. True friendship.

Liked the opening of this episode. Different for R&I - done well.

There were some great parts to this episode, and overall I liked it. Mostly I liked the fun parts.

Bass! He finally made it in an episode this season! It was a cute scene.

"Why is your door unlocked?" Well, Jane why are you just walking in like you live there? ;)

Angela was amusing. Stanley was unnecessary.

Korsak was great. Loved his willingness to protect his source and the interaction between him and Jane. It was great seeing Jane standing up for him and showing her loyalty.

"Code 10, that's lunch. I'm off for a personal. That's when you have to do number two." Gotta love the good doctor!!

Maura actually had the best lines this episode.

As I said I liked the episode overall.

One of my favorite episodes. I love Maura and Doyle. When they're together it brings out a side to Maura that we otherwise don't see.

I tweeted Sasha about them: "I love the scenes with you & John Doman! Do you both like the ongoing father/daughter storyline?"
Sasha's response: "I love it when he comes around! I think it's a very interesting side to Maura!"

I will admit as this series moves along I am less and less interested in the "crime" unless it has a huge effect on Jane or Maura's personal lives. To me the crimes should be used simply to move the characters around, not for some great mystery to be solved. That may be the other thing I like about Doyle. Crime is always around him but it's about how it effects Maura and her relationship with her father.

Interesting to note that with other crime shows I'm the opposite. I'm more interested in the crime and how they solve it. I think that's a testament to these characters. I'm much more invested in them.
Posted by Kelly/Taiko at 8:37 AM No comments: