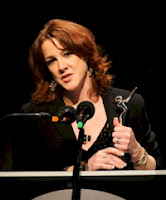 Question from Kristen Cohn:
I've noticed several of the episodes names share their names with song titles. I'm thinking it's on purpose, but I'm not sure.
Janet's response:
Yep, it's on purpose. I decided after the pilot and the first episode to start naming episodes after song titles...because I could...;-)
----
Question from Nathalia Conti:
Relevant question: are we going to see Maura's walk-in closet and shoe collection this season?
Janet's response:
It's a VERY relevant question. Don't tell anyone, but I'm hoping we'll be able to build Maura's bedroom in Season 4. If you look behind the curtain here at Oz, you'll see that there currently IS no bedroom...so don't look until we have something to show you...ssshhh...it's our little secret.
----
Question from Alyssa Benalfew:
Will we see more Jane and Frost or Frost and Frankie interaction? Jane and Frost have nice moments and Frost and Frankie look like they could be great friends.
Janet's response:
I completely agree, and yes, we will see more of this adorable threesome. Frost and Frankie also do some very funny stuff together in upcoming shows. I personally love the ongoing brother-sister, towel, sibling-rivalry, "I love you but you annoy the heck out of me" relationship between Jane and Frankie.
----
Question from Victoria Baljo:
When you developed Rizzoli's character, did you use one person in your life to model her after or more than a few??
Janet's response:
Tess Gerritsen created Det. Jane Rizzoli for her books. I identified with the fictional Jane in Tess's books, but when I created the TV "Jane Rizzoli," I think without intending to, I imbued her with many of my own traits – and with many traits I see in Angie. Tess, who is a wonderful writer and a master of suspense and mystery, will tell you her books aren't funny. I can't live without humor and did not want to spend all the hours I spend working on this show without the relief of humor. I try to balance the show with enough of it to satisfy myself, my audience, and my great cast while still constructing a good mystery and serving all these wonderful characters.
Obviously, Jane isn't real, and Jane isn't me or Angie, but I've had to drop certain expressions I gave to Jane in dialogue because now I sound like I'm copying a fictional character...who says what I write for her to say ... I've got some Maura ticks, too. I'm constantly referencing studies, facts, figures and any research I can remember plus how did we live without GOOGLE? My children and husband are very nice about it, but I believe there's some secret eye-rolling that goes on ...

Source: Creator's Corner
Posted by Kelly/Taiko at 6:13 AM